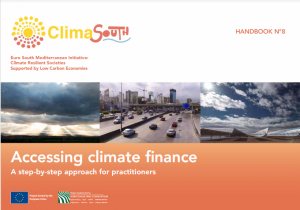 Climatekos and Trinomics have written a handbook to support countries in the South region of the European Neighbourhood and Partnership Instrument (ENPI) in accessing climate finance. The handbook, with the title “Accessing climate finance: A step-by-step approach for practitioners”, was released in a joint EIB/ClimaSouth side event at the COP-22 in Marrakesh.

The ENPI South region (Algeria, Egypt, Israel, Jordan, Lebanon, Libya, Morocco, Palestine and Tunisia) is severely water stressed, and climate change is likely to exacerbate this situation. Adaptation projects are emerging, but more finance is needed to address land degradation and desertification, which have severe implications on agricultural production. At the same time, the region presents great potential for renewable energy investments, but international funding has so far been concentrated in only a few countries, most notably Morocco.

The handbook aims to give government officials and other stakeholders the tools to prepare and assess project applications to international and national climate funds, so that more climate finance can be mobilised to the region. It provides an overview of relevant funding sources, and templates for a concept note and full project/programme proposal that can be used in the application to the funds. The templates include important information sources and examples of best practices.

The handbook responds to the needs that were voiced during the ClimaSouth Climate Finance regional workshop for the southern and eastern Mediterranean countries, held in Barcelona on 9 – 11 March 2016. Although specifically conceived for ENPI South countries, the guidelines in the handbook may be used by stakeholders globally.

The digital version of the handbook is accessible on ClimaSouth’s website.

How is Belgium tackling the global climate challenge in vulnerable countries?
2 November, 2021